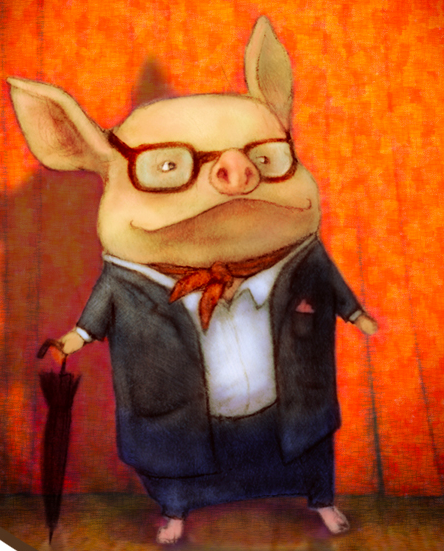 Well, folks, I have good news, and I have bad news. Let's start with the bad news. My guests today for MR. PIG LIVE are unable to appear. They offered a phone interview in lieu of a live in-studio segment, but that didn't go quite to plan. The GOOD news, however, is that we have some audio.

[The following is a transcript of the attempted interview with author DREW DAYWALT and his crayons from the hit book THE DAY THE CRAYONS QUIT.]

DREW - First off, I’d like to thank Mr. Pig and everyone at the Little Crooked Cottage for inviting me and my crayons to do this interview.

RED CRAYON - Wait a sec... Are we getting paid for this?

DREW - Well, no. This is just something nice that we do, so people can get to know us, ya know... since they like the book so much.

RED CRAYON - No, no, no... You’ve said plenty. It’s our day off and you’re making us work. Fine. I get it. Why don’t you start by saying that Duncan is really just a pseudonym for you as a kid?

DREW - I’m going to. But we haven’t started the interview yet, and--

RED CRAYON - Don’t forget to tell them that in the book, Duncan learned his lesson.

RED CRAYON -- and that you didn’t. Because, you know. Here I am... being overworked.

DREW - Look, if you’d just let them start the interv--


PINK CRAYON - At least you GET to work, Red honey.

BLACK CRAYON - What did White say?

(snickers from the other crayons)

PURPLE CRAYON - Hey Black, maybe you should outline it for him so we can read it.

(more snickers from the crayons)

BLACK CRAYON - Keep it up, Purple, and you’ll be a chalk outline.

PINK CRAYON - Just make sure you color inside the chalk lines. You know how he gets.

PURPLE CRAYON - Oh is that where this is going? That I’m too neat? Unlike you slobs, I like to color inside the lines once in a while, SUE ME.

DREW - Okay you guys. Let’s leave Purple alone. I told you, no fighting during the interview. People will get the wrong idea about us.

(big laughter from the crayons)

GREEN CRAYON - Guys, guys, guys!! I agree with Drew. Could we please just let them start the interview?

GREEN CRAYON - Oh I’m SORRY. Can I help it if I like my job?

BEIGE CRAYON - (mocking Green) “Look at me! I’m Greeeeeen Crayon and I want to congratulate you on a career of coloring things green so far.”  Such a kiss up.

GRAY CRAYON - Yeah, with a side of wheat.

(the crayons all crack up)

GRAY CRAYON - You’ve seen my workload. You’d be tired too.

DREW - Blue, where have you been this whole time?

PINK CRAYON - Maybe we should have brought him a footstool.

BLUE CRAYON - Short jokes? Is that what this has come to?

DREW - Guys! Please!! Everyone’s going to think that we’re all a bunch of misanthropes who whine and bicker and fight all the time.

GREEN CRAYON - Speaking of fighting, where are Yellow and Orange?

(sounds of tumbling and fighting - a door bursts open and two crayons fall in, wrestling and struggling)

RED CRAYON - Speak of the devil. What are you fighting about now?

ORANGE CRAYON - This animal tackled me in the hallway.

YELLOW CRAYON - Yeah. And with good reason too. He said campfires are orange, when we know they’re yellow.

ORANGE CRAYON - You want a piece of me, Red? Huh? You want some of this?

RED CRAYON - Sure! Bring it, you secondary color!

YELLOW CRAYON - No one picks on Orange but me!

(At this, point, all that can be heard is the sound of Red, Orange and Yellow fighting, then Drew and all of the other crayons jumping into the fray. The end result is a cacophony of jabs, punches, insults and general chaos.)

PEACH CRAYON - (timidly) Such bad behavior. And I thought I was embarrassed. I hope the sequel has crayons that know how to behave themselves...

BROWN CRAYON - And for goodness sakes, put on some pants.

So, there you have it. Nina from Lunches with Love made a scrumptious and adorable lunch, expecting a box FULL box of Crayons to drop by, but, alas, we shall not let it go to waste. Scroll down for a peek at Nina's delicious creation after I tell you a little more about Drew and his colorful crew of characters. 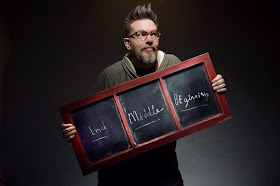 Ever since his childhood in one of Ohio’s most haunted houses, writer director Drew Daywalt has been writing escapist fantasy and building worlds of his own. With a degree in Creative Writing, and a concentration in Children’s Literature from Emerson College in Boston, Daywalt set off to Hollywood where he spent years writing for Disney and Universal on such beloved shows as Timon & Pumba, Buzz Lightyear, and Woody Woodpecker, and where his animated series The Wacky World of Tex Avery garnered an Emmy nomination.

With an eye toward picture book writing, Daywalt’s first book THE DAY THE CRAYONS QUIT, illustrated by Oliver Jeffers, debuted on the New York Times Best Seller’s List in June 2013, and has since become a number 1 Best Seller.  The crayons will return in August 2015 for the highly anticipated sequel, THE DAY CRAYONS CAME HOME. 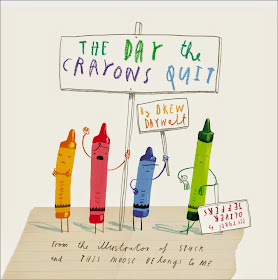 THE DAY THE CRAYONS QUIT

Goodreads' 2013 Picture Book of the Year!

* “Making a noteworthy debut, Daywalt composes droll missives that express aggravation and aim to persuade, while Jeffers’s (This Moose Belongs to Me) crayoned images underscore the waxy cylinders’ sentiments: each spread features a facsimile of a letter scrawled, naturally, in the crayon’s hue; a facing illustration evidences how Duncan uses the crayon, as in a picture of a giant elephant, rhino, and hippo (Gray laments, 'That’s a lot of space to color in all by myself'). These memorable personalities will leave readers glancing apprehensively at their own crayon boxes."—Publishers Weekly, starred review

"Jeffers delivers energetic and playful illustrations. The drawings are loose and lively, and with few lines, he makes his characters effectively emote. Clever spreads, such as Duncan’s 'white cat in the snow' perfectly capture the crayons’ conundrum, and photographic representations of both the letters and coloring pages offer another layer of texture, lending to the tale’s overall believability. A comical, fresh look at crayons and color."—Kirkus Reviews

"Fresh and funny. Oliver Jeffers's quirky, joyful illustrations convey the strength and comedy of the crayons' sentiments, and children ages 4-8 will laugh in recognition at seeing their own color preferences reflected back at them."—The Wall Street Journal